As some of you may know, I've been unable to create/make fiber art for quite a while due to surgery. It has been a very tough predicament for me. But as I endured this involuntary hiatus I decided to make the best of it. My first efforts involved the development of goals geared toward marketing myself as an artist. Probably the most useful effort involved creating a chart with explicit goals. It gave me a blueprint for getting my name out there and going after some things I've wanted to accomplish for a very long time. I'll write more about this in another post.

Most recently, as I gained use of my arms and ability to sketch I began to think about my own artwork and how to create better art. It was in part prompted by a discussion on one of the e-mail lists I belong to. I developed four (4) key questions for myself:

1. Do I have an artistic voice that is strong, clear, and distinctive?
2. How does my work compare to other well respected (fiber) artists in terms of having a strong artistic voice?
3. At this point has it become important to me that my work sells?
4. Of all the art I have created, are there a few that stand out in terms of excellence? If so am I still excited about that work and what can I learn from it?

I had a lot of time to think about these questions and it became clear that while I think I have a distinct style...it could be stronger and more consistent. I visualize the work of Faith Ringgold, Dorothy Caldwell, Susan Shie or Lisa Call - you know at a glance that it is their work. All are gifted successful artists, able to garner acclaim that seems to translate into sales. (I guess you now know my response to question 4, lol!)

As for my own work I had a few observations. For a long time, I have been experimenting with how I use lines and shapes to create the map-like artwork that I love to create. I've been subconsciously playing with 2 languages: 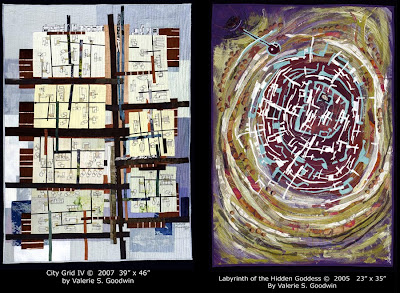 What excites me about the organic language is that is allows me more freedom of expression and emotion. And it recalls maps of more ancient places, something I find poetic and inspirational. I did some research on iron settlements and the following are inspired by this study (and the quilt above on the right)...so the bottom line is that I think I have a potentially strong series. Here are some very conceptual sketches: 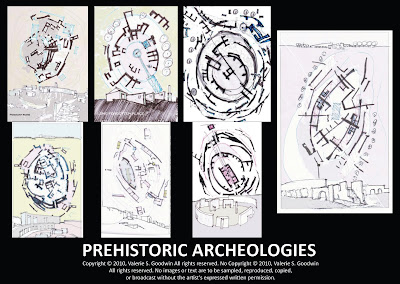 We'll see where this takes me. I still can't sew much and will start teaching next week at the university. As a result I won't be following up on these sketches soon.

At some point I'l post conceptual sketches for a few other series. Hope you'll visit again soon! If you've had similar thoughts about your work why not add a few comments?
Posted by Visiting at 9:09 AM 10 comments: 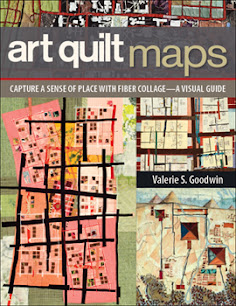 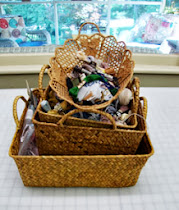